The Catholic parish centred on Boonah stretches from the NSW border in the south to the boundary with Ipswich in the north. This is roughly the same area as the land occupied by the Ugarapul Aboriginal tribe and many of their placenames survive to today, including Boonah (“blood wood tree”) and Kalbar (“star”). The names of the towns of Peak Crossing and Harrisville reflect the European heritage, named after Flinder’s Peak and the Harris brothers who built a cotton gin in the early 1860s at that place.

The first European settlers were the English and Scottish squatters and their employees, who took up the local runs about 1842. The Brisbane and Ipswich priests travelled occasionally through the Boonah area to bring the sacraments to the scattered population.

Queensland separated from NSW in December 1859 and in the next decade thousands of emigrants came from Europe to the new colony. The emigrants selected land to farm, slowly moving south from Ipswich to Peak Crossing, Harrisville in the 1860’s, then Kalbar and Boonah in the 1870’s and further south. Many of the new selectors were Catholic and the mass was said in the scattered areas by priests riding from place to place on horseback.

In 1882, the first church in the area was built at Peak Crossing and named St John’s. It was replaced by the present building in 1914. 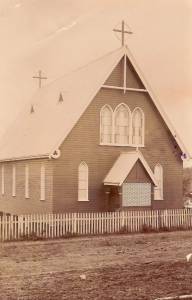 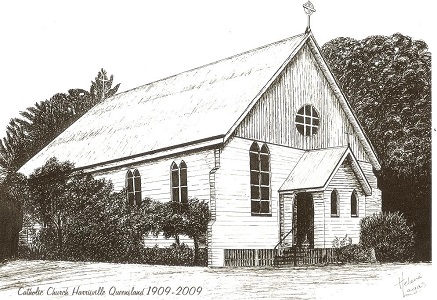 On the last day of 1879, Fr Scortechini rode from Beaudesert to the Boonah area, only two years after the first selectors arrived, three years before the first shop opened in the town of Boonah, and a decade before the school opened there. He celebrated the mass at Mt Alford on the first day of 1880, and returned regularly to the area. On 1 November 1887 a church was opened at Boonah and named All Saints. The current brick church is the third building and was opened in 1961.

The following year on 9 September 1888 another church opened at nearby Kalbar (then called Engelsburg). It was named St Boniface, the saint of the Germans, as many of the local selectors were German. The Ipswich priests served the Peak Crossing and Kalbar churches, while Beaudesert priests served the Boonah church. The Kalbar church was unusual in that it had its own cemetery. The church was re-located into the centre of town about 1945 and closed and sold in the mid 1980’s. 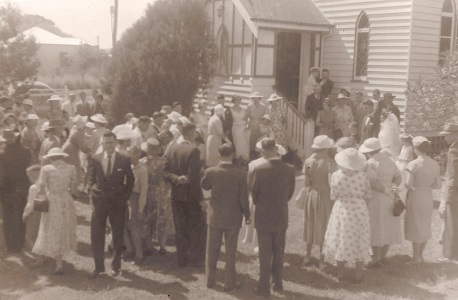 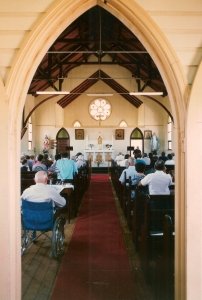 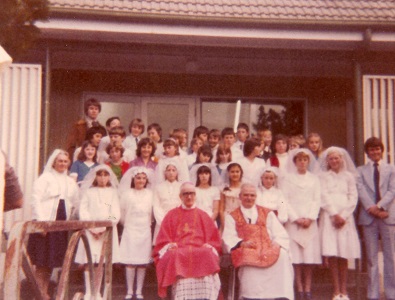 In 1907 another church opened at Croftby south of Boonah, and was named St Andrew’s in honour of the Ipswich priest, Fr Andrew Horan. He had been instrumental in helping the families there (Kerwin, Brennan and Corcoran) to find a place to settle.

In 1909 another church opened at Harrisville and was named the Sacred Heart. Though this was a relatively late date, the mass had been celebrated in homes in the town for decades, including by Fr (later Archbishop) Duhig.

In 1910 the Boonah area became a parish with its own priest living at Boonah but serving five churches – Croftby, Boonah, Kalbar, Harrisville and Peak Crossing. The last two were attached to Ipswich parish 1917-53.

In 1956, with Fr Morgan Howe as PP, the parish built All Saints’ School beside the church at Boonah, built with a great deal of voluntary labour and staffed by the Sisters of Mercy. Since about 1990 the school has been staff entirely by lay people.

In the late 1970’s it was decided to close Croftby and Kalbar churches, leaving Boonah’s All Saints’ to serve the south of the parish and Harrisville’s Sacred Heart and Peak Crossing’s St John’s to serve the north.